Outside in Rockefeller Gardens

We are grateful to the Jaffe Corporation and Richard & Jeanne Jaffe for sponsoring this year’s Holocaust Exhibits. The Holocaust is a grim reminder of the senseless systematic murder of millions of innocent people and of all humanity lost. A special feature of the exhibits are “Henriette’s Letters,” a collection of over two hundred letters and photos from family members in Holland during the Holocaust to each other from home to inside work camps, before and after their abduction, and finally a letter where a son sees his mother removed to a “rest” camp—Auschwitz. Do not miss this exhibit.

The Festival is grateful to Upchurch, Watson, White & Max Mediation Group for sponsoring our Speakers’ Pavilion. You will be entertained, moved and impressed with this year’s lineup of presenters.

Speakers Scheduled to Appear Inside The Casements:

Colleen Coughlin, Presenting “My Eyes are Still Burning”
The Life and Writings of Isabella Leitner

Colleen Coughlin, a senior at Father Lopez Catholic High School in Daytona Beach, last appeared at the Heritage Festival in 2018 with her performance of Anne Frank and the Holocaust. Colleen returns this year to portray famed author and Holocaust survivor, Isabella Leitner. Leitner’s book, Isabella From Auschwitz to Freedom, inspired Colleen’s new dramatic presentation. “In keeping with my promise to Gloria Max, who recently died, I am committed to being a new voice, to tell the story of Anne Frank, Isabella Leitner, and the six million Jews who died,” Colleen said. “Their voices have been silenced, but I will continue to be heard. I hope to reach people to make them understand the enormity of what happened, so they, too, begin to repeat the story and our combined voices become a defense against the evils of tomorrow.” See her emotional performance at 11:30 a.m. and 3:00 p.m. 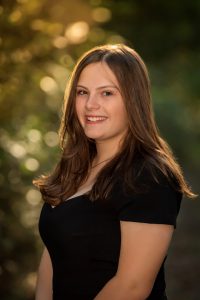 Howard Megdal is a journalist and editor who has worked hard over his career to equalize coverage between both men and women’s sports, while covering baseball, basketball, soccer, and other sports. He is the founder and Editor-in-Chief of The IX Newsletter, a daily newsletter covering five different women’s sports, and The Next, a 24/7 women’s basketball outlet. He is a freelancer for numerous publications, including The New York Times, The Washington Post, FiveThirtyEight, and Forbes. His books include The Baseball Talmud, Wilpon’s Folly, Taking The Field, and The Cardinals Way. Mr. Megdal will discuss his updated and expanded edition of The Baseball Talmud. From the icons of the game to the players who got their big break but never quite broke through, The Baseball Talmud provides a wonderful historical narration of Major League Jewish Baseball in America. All the stats, the facts, the stories, and the (often unheralded) glory. This delightful compendium reveals that there is far more to Jewish baseball than Hank Greenberg’s powerful slugging and Sandy Koufax’s masterful control. From Ausmus to Zinn, Berg to Kinsler, Holtzman to Yeager, and many others, Howard Megdal draws upon the lore and the little-known details that increase our enjoyment of the game. Be sure to catch Megdal at 12:00 p.m. 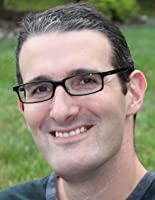 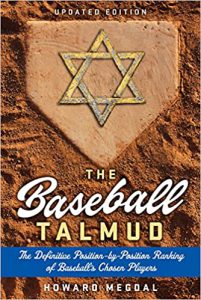 Norman J.W. Goda is the Norman and Irma Braman Professor of Holocaust Studies at the University of Florida. He received his Ph.D. from the University of North Carolina at Chapel Hill. He studies modern European history and specializes in the history of the Holocaust, war crimes trials, and twentieth century diplomacy. He teaches courses on the Holocaust and Nazi Germany from historical and interdisciplinary perspectives. He is the author of Tomorrow the World: Hitler, Northwest Africa, and the Path toward America (1998); Tales from Spandau: Nazi Criminals and the Cold War (2007); The Holocaust: Europe, the World, and the Jews (2013). He has also co-authored, with Richard Breitman, US Intelligence and the Nazis (2005) and Hitler’s Shadow: Nazi War Criminals, US Intelligence and the Cold War (2010). He has edited two volumes of international essays titled Jewish Histories of the Holocaust: New Transnational Perspectives (2014) and Rethinking Holocaust Justice: Essays Across Disciplines (2018). He served a lead editor on To the Gates of Jerusalem: The Diaries and Papers of James G. McDonald, 1945-1947 (2014), which concerns Holocaust refugees and the question of Palestine in those years, and Envoy to the Promised Land: The Diaries and Papers of James G. McDonald, 1948-1951 (2017) which concerns McDonald’s work as the first US ambassador to Israel and the initial years of the new state. Goda has published articles in various journals including the Journal of Modern History, The International History Review, The Journal of Contemporary History, and Antisemitism Studies, and his work has been the subject of stories by the The New York Times, the Associated Press, US News and World Report, and other major news outlets. Goda has served as a consultant to the US and German governments, as well as for various radio, television, and film documentaries in the US, Europe, and Israel. Dr. Goda will present his work at 1:00 p.m. 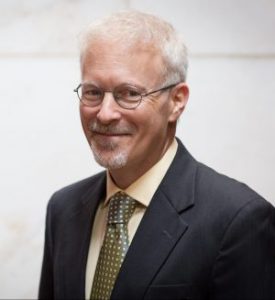 In 1940, Claire Soria was only 5 years old when the Germans invaded Belgium.  Her parents, Nathan and Sara Mytnowiecki moved the family  from Poland to Belgium.  At some point, Claire’s mother found a Christian couple, Lambert and Lea Sabaux to take Claire in and hide her from the Nazis.  Soria was so afraid of being captured that she never attended school.  Claire Soria spent the whole time in hiding after seeing so many Jews taken by the Nazis and shipped off to concentration camps. Soria’s mother, father, aunt, and uncle were discovered and transported to Auschwitz where they all perished. After the war was over, Soria’s aunt was able to get her. All Claire Soria has left from her family is a wicker basket which was a gift from her father on her sixth birthday.  Inside the basket were photos of childhood photos of her family taken before the war. Be sure to see Claire at 2:00 p.m. 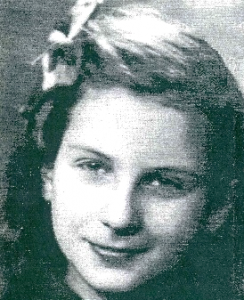 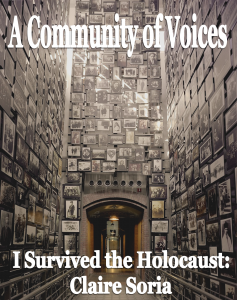